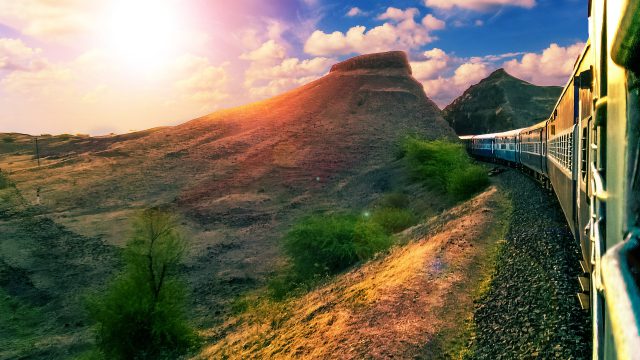 It is often said that the journey is as beautiful as the final destination. Though the context in which this is said, is often philosophical, the same does hold true for journeys that involve travel as well. Have you ever been on a train ride and become besotted by the scenery?

Railway tracks of the Indian Railways zig-zag through some of the most beautiful terrains. If you have not been on a long-distance train journey yet, this article will inspire you to do just the same. Train journeys may be long, but they are the best way to travel. They let you view terrains that you otherwise would not see. Train rides allow you to get up close to some of the most wonderous sights, both natural and manmade. Are you ready to travel the country by train?

The Jammu to Baramulla line is easily one of the most stunning rail routes in the country. Imagine riding on a train as it chugs across a landscape that is out of a dream – snow-capped mountain peaks, deep gorges and valleys, gushing rivers and streams, frothy waterfalls tumbling through alpine forests. Imagine mist rising from the valleys, engulfing everything. Imagine breathing the freshest air. Imagine your nostrils being filled with the smell of the pines. Imagine mother nature at its best and your train navigating through it. Does that impress you?

The other interesting feature of this train ride is the manmade structures. The train passes through a huge number of tunnels, that have been cut through the mountain chains. The longest of these tunnels is 2 ½ kilometres in length. If that sounds amazing, imagine the train passing over bridges – not one or two, but a total of 158 bridges, joining mountains, crossing valleys and the gurgling Chenab. In fact, the bridge over the Chenab has the distinction of being the highest railway bridge in the country.

The Mandapam to Rameswaram train journey is not for the fainthearted. And if you are up for it, this train ride will give you the thrill of your life. The train crosses over the Pamban Bridge, which has been documented as being among the most dangerous railway bridges in the world. The bridge is dangerous because of its location and because it stands exposed to the most corrosive environment and it needs constant maintenance. In fact, a
team of skilled workers, take care of its maintenance on a daily basis. The Pamban Bridge is the second largest sea bridge in India, and it connects

The train between Mandapam and Rameswaram moves slowly over the Pamban Bridge, with the waters of the Palk Strait lapping below. Here is a fact that will make the hairs on the back of your head stand – an entire train, with over 200 passengers onboard, had washed away, as it crossed this bridge, during a severe
cyclonic storm, in 1964. Gaze out through the window, and watch the vastness of the Bay of Bengal, as the train moves slowly over the tracks. Admire the picture-perfect setting of the
blue waters and the fishing boats bobbing along. You will have your heart in your mouth on this train ride, but you’ll love the adrenalin rush.

The Kalka to Shimla train ride is best enjoyed during the winters, after some snow showers, but that is not to say that the journey is not enjoyable in any other season – but the snow does add to the charm. A narrow gauge, toy train plies over this route, and as the name suggests, it is much smaller in size, in all aspects, but it is cosy and comfy and ever so romantic. The toy train and track are named a World Heritage Site by UNESCO. The Kalka-Shimla toy train passes through 102 tunnels and over 82 bridges.
Watch out for Tunnel no:33, the longest tunnel on this stretch. The scenery is breathtakingly beautiful. You will traverse along deep valleys and mist filled fields. You will see the mountains rise in the distance and the plains far below. You will rush past forests covered with rhododendrons and pine. You will catch glimpses of brightly coloured flowers and ferns growing wild on the rugged rocks. You will see tiny streams trickling out of the rocks. This journey will leave you enchanted.

The Ratnagiri to Mangalore train route negotiates through the Western Ghats. Grab a window seat and enjoy the train ride and the amazing show that nature puts up. This train ride on this stretch is magical, and will leave you spellbound; as it
crosses the Sahyadri hills and rumbles along the shores of the Arabian Sea. The Western Ghats is a profusion of natural beauty, which you will witness on the journey. The landscape changes at an astounding pace – from lush green meadows to deep ravines, from coastal towns to bridges and tunnels, milky white roaring waterfalls to calm flowing streams. Gush over the most spectacular sites on this route – Dudhsagar, the tallest
waterfall in the country. It is located on the Goa-Karnataka border and is incredibly beautiful.

The Chambal valley had been infamous for decades for its dacoits. The train ride through the Great Beehad of Chambal takes you through what once was dacoit land. The Beehad of Chambal or the ravines were once home to some of the most notorious dacoits that India has ever had. Chambal is a semi-arid stretch of land with a surreal, almost eerie appeal to it.

The ravines and the harsh landscape can send chills down your spine and make you imagine the life of the notorious dacoits. There is something about train journeys that is truly amazing. You just need to sit by a window and wait to be amazed. Train journeys allow you to see the country’s most beautiful landscapes. Catch a beautiful sunset, as your train clips through a wilderness. Enjoy the beauty of crops swaying in the vast open fields. You can find spectacular beauty anywhere, you just need a keen eye.

Travel to India with cheap flight tickets from the USA