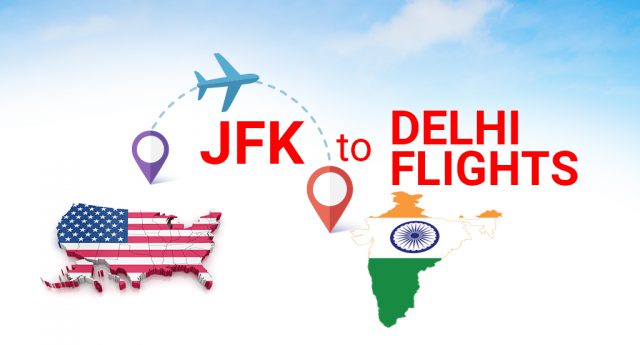 Flights from USA to India: A Growing Economic Opportunity

How does Online agency offer cheap prices and why is the USA to India route expensive?

Online travel agencies do provide unpublished fares to customers that are usually cheaper than what is offered to their web portal. It is considered one of the best ways to book cheap international flights and cheap domestic flights. Cheap flight booking is possible on highly competitive routes, at present the flight operates enjoy very less of it. The civil aviation industry has taken note of this development and has started looking for opportunities to exploit the same. Entering new competition can certainly help in reducing the one way plane tickets and cheap round trip flights rate.

JFK is one of the busiest airports in the United States. The airport is a part of a three airport chain that assists the people of New York to travel to both domestic as well as international locations. JFK has been a popular airport for people who are looking to travel to India. The availability of large numbers of flights to almost all major cities of India makes it a clear favorite among the Indian diaspora who is looking to travel back to India for spending quality time with loved ones. Some of the most sort after travel destinations between JFK to Indian destinations are as follows:

Buying tickets at the best price has always remained a need among people across all cross sections of the society. Some of the simplest ways to buy a ticket at the right price include things like;

Buy tickets during off-seasons – Off seasons are the best time to buy tickets, this will help you travel to places at the cheapest price possible. Reschedule your priorities, this will make the entire travel experience awesome. The chances are that you will travel in an airline that is sparsely populated. Giving enough personal space to enjoy and cherish.

Lookout for unpublished fares – Unpublished fares are fares that are not available online. The only way to get hold of the same is to call the agents who deal with the same. Unpublished fares allow customers to look into the best possible ways of buying tickets at negotiable rates. Even small savings in flight tickets will add up into a large saving in case of a family.

Look out for stopover and layover flights – Flights with more than one layover and stopovers can certainly help in reducing the cost of travel. Layovers and stopover flights take a longer time to reach the desired destination but such flights are cheaper than the average flight that has no stopovers or layovers. Direct flights between the two destinations are considered one of the most expensive alternatives of the lot.

While traveling from the USA to India, Europe is the best layover vacation spot that you can find. Layovers usually last for more than 24 hours or so, if planned properly these layovers can be used in the best way possible. Here are some of the best places to try layover in Europe.

Croatia is one of the most underrated countries in the world. The capital of Croatia Zagreb is considered one of the most beautiful cities in the world. The city is a mixture of Gothic architecture and modern wonders, the stone paved roads and medieval churches, palaces, and buildings. Walking through these streets will transport you to the medieval days. Zagreb is considered the youngest capital in Europe with a population of one million. The city is also considered one of the safest in the world, making travel an easy and exciting endeavor. Croatia ranks in the top of the list of European family vacations destinations.

Paris is the capital of France, the largest Francophone nation in the world. Paris is leading the world in areas of luxury, fashion, food, and beverages. Paris has a large number of old monuments that give a glimpse of the proud past of the city. The Palace of Versailles is one of the most beautiful monuments in France, that is a must see if you are in Paris. Arc de Triomphe, The Louvre Museum is one of the most visited places in Paris. If you are in Paris and have an opportunity to visit these places, just do it!. Eiffel Tower, the iconic monument that defines Paris is a must visit place. Millions travel to Paris to get a glimpse of the same. A long layover can certainly help you get the best out of Paris, France. Paris ranks top in the list of the best  European tours for families destination list.

Glasgow, the capital of Scotland, has been attracting a lot of people. Glasgow Airport is the main airport that serves the people of the city. Scotland is now gradually evolving into a transit location for travelers looking to travel to India from the US and vice versa. Scotland is blessed with natural beauty, Glasgow is no exception. The city is world renowned for its beautiful medieval infrastructure, modern amenities, and clean environment. There are a lot of activities that can keep you engaged for days. Scotland being part of the United Kingdom has a special place in the minds of Indians. Furthermore, every minute spent in Scotland is a time well spent! It refreshes your mind and body. Scotland is the emerging star among the best European tours for families destinations.

Rome is the capital of Italy, the city with more than 1000 years of history. Rome has some of the largest numbers of ancient monuments of any other city in the world. Rome is home to another interesting anomaly, the city has a country inside its geography, the Vatican City. Some of the must see places in Rome includes places like Colosseum, St. Peter’s Basilica, Pantheon and so on. The old medieval charm of the city can bring positive energy to tourists who visit the same. The food available in Rome is great as well. They offer some of the freshest produce available in the country. European family vacations list is not complete with out the mention of Rome in it.

Traveling helps people reconnect with oneself. Traveling helps people reduce stress and pressure. Most immigrants travel to India from the USA and vise versa do the same to reconnect with loved ones. These are inevitable trips that are taken by people to be close with their loved ones and enjoy quality time with the same. Traveling gives people the means to experience life at its finest.